Sorry it's been a while since I've posted -- almost four months in fact. But the good news is that I'm still here!

After that last incident, Ellen took me down to the island for a four-day weekend in November. I guess that'll teach me to make a statement! But it was nice to have a change of scene. I was very good while I was down there, and so long as my litter gets changed every day there's no reason for me to make a statement.

About three weeks ago, Ellen put me on a diet. She's been threatening this for months now, and the vet even e-mailed a suggested food scheme. But it took E so long to actually implement it that I assumed she'd forgotten. Not so lucky. Now, half my food comprises these disgusting diet pellets. They look like my normal food, but they are no more than a 'cheap' imitation. Yuck. I have to eat them, or else I'll starve, but I don't notice any weight coming off yet! (Not that I'm in any way fat, or anything.)

The week before last, we went back to the eye specialist. You know, the one who wants to yank my eye out? Well, I did NOT want to go there, and I made sure E knew it. She was so certain I would be good so long as she fed me before we went, but I wasn't falling for that again. To make it even more worthwhile, the vet had students witness my examination, and I'm not sure they'd ever encountered such a devilcat as I. Ha Ha! I showed them! Hiss, spit, scratch. In the end they had to wrap me up in a towel. (I didn't like that so much.)

Here's a photo of my eye -- the one that changed colour. I'll try to post photos after each examination -- for I have to go back AGAIN in another four months. But at least I get to keep my eye for the time being. The specialist vets are fascinated by my eye, and have evidently been asking other opinions in on-line vet chatrooms. Cool huh? 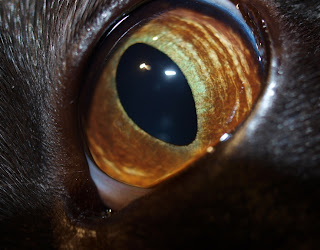 But do you know how off-putting it is hearing people talk about ripping your eye out? As though it was a splinter or something! I mean REALLY! This is my EYE we're talking about!
at 7:26 pm

i'm so pleased you've posted again. i had been missing hearing about your adventures.
fingers crossed all goes well with your eye.