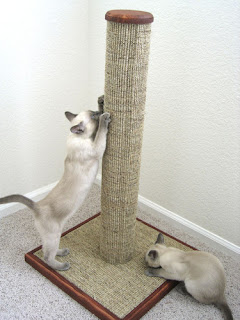 Don't be fooled by those humans who expect you to work out on the same piece of equipment day in, day out. There is more to life than that.

Try for some variation in your scratching. Sure, the couch arms are an old favourite of cats around the world, me included, but it's possible to get really creative. Instead of the couch, try the office desk chair, or the bed head, or the rug on the floor . . . or, if you're really game, your human's leg. I've also found that scratching underneath chairs is a really fun activity, and the humans don't get too upset, because they figure no-one can see the damage.

Whatever you do, do it properly. Don't let anyone deter you from your chosen scratching place. It's an important part of your daily routine, so don't compromise.
at 11:06 pm