First, let me say thank you to Chenna for extending this invitation. But -- matron cat? Did I hear that properly. That little minx of a devilcat is still whispering those words? Sheesh. I am not a matron and nor do I have an apron, just a bad hair month. We all have those at times. Go out into the wind, Chenna, and then let's see whether your whiskers are straight.

Let me introduce myself. I'm Beth. I'm black-and-tabby. Tabby, hear that, Chenna? Not scabby. Any old cat can be black-and-white or tabby-and-white, but black-and-tabby is something else! I've included a picture so you can see that the ridiculous one that Chenna has put up here is just the bad hair month. I do not have a white chest, but splendid black stripes everywhere. (You did ask, right?) 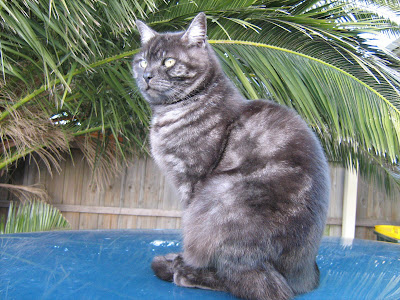 My age is a secret. Only I know it. That's the way it is, and that's the way it should always be. Lesson #1: don't let humans know your age. If you do, some of them will be inclined to do stupid things like throw you birthday parties. They may put stupid party hats on your head and blow toy trumpets near your ear. Do not dignify such proceedings with your presence, no matter how good the food. Flee. Flee as fast as you can. Lesson #2: never underestimate the stupidity of some people.

I live with two stupid dogs: the blonde bimbo golden retriever and the little red rat-face toller, and a host of birds. There was a fish too, but the blonde bimbo ate it. Lesson #3: never underestimate the stupidity of dogs. They are so far beneath cat's notice that it's not funny.

I like to spend my day watching for mice in the aviary; lazing on the cars; catching rats in the swamp, eating them and vomiting them up in the garden over the road; being on guard at the front of the house; and going for walks with the family. Yes, cats, lesson #4: walks are not just for dogs, but more of that next week. Well, that's a long intro, and like Chenna I do believe in brevity, so I'll sign off and leave it at that.
at 1:28 pm

Thanks, Beth.
I'd love to come over and check out your swamp some day.

Ooh, you would have so much fun. We have the fattest, juiciest rats on the planet!